When my dog Oslo was first diagnosed with cancer, I developed the notion that it was my fault. His diagnosis came about a year after my divorce was final: lingual malignant melanoma. The timing did not escape me. I knew somehow that Oslo had, on a cellular level, absorbed all the malignancies of my heart—all my grief, all my rage, all my fear. He had been at my side, as always, but especially during that really bad year when I cowered in a heap after the children left for school. I sobbed into his smooth brown fur and when I was exhausted and tried to rest, he curled up next to me, pressing the curve of his spine into the backs of my knees. That was the kind of support I needed during the divorce year, and Oslo knew just what to do.

He was five at the time of the diagnosis. We got him when he was a smooth-bellied puppy, about five months old, according to the estimates of the shelter. They say he was a beagle-lab mix, but he did not look like his siblings, who were all beagle-sized but with the coats of black Labs and yellow Labs. Oslo was bigger. His brown fur was flecked with black, and the tip of his tail was black. His face had a sweet, beagle expression and he possessed the strong wide chest of a stout, muscular dog, most likely a pit bull, though no one wanted to write that on any official record of his. 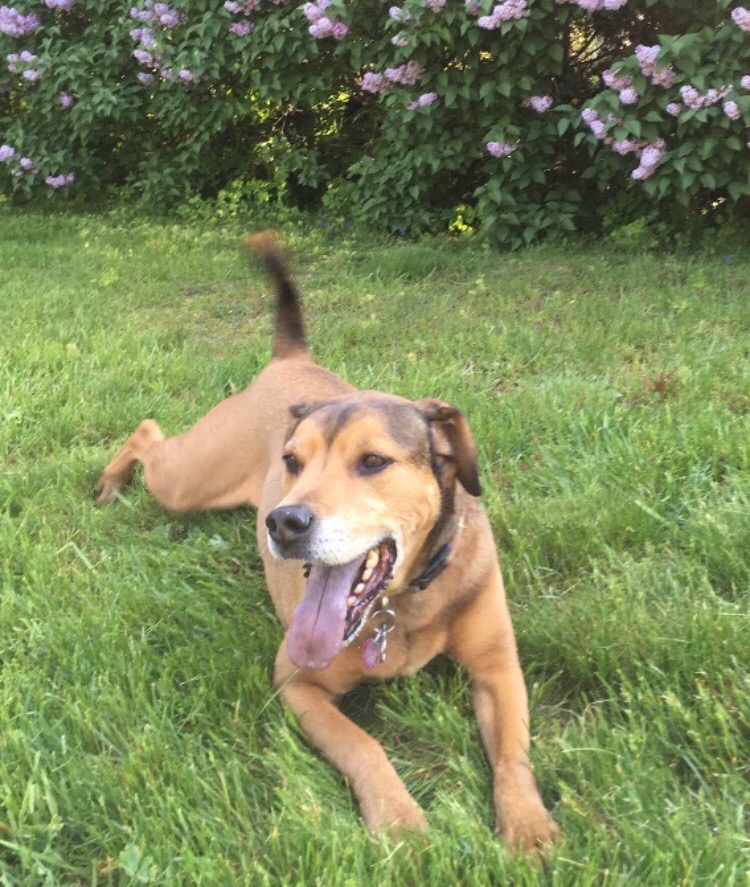 Just before the diagnosis, he had become excessively drooly and his mouth smelled foul. I presumed he had some sort of tooth decay, so I scheduled him for a cleaning. I assumed they’d have to remove a tooth. When Oslo’s long tongue hung from the side of his mouth as he panted anxiously during the examination, the vet discovered a walnut-sized tumor on the back of Oslo’s tongue. The results of the biopsy came back positive, and the vet recommended an oncologist so that we could discuss his prognosis and options. My vet tried to be optimistic, but he did tell me how aggressive this cancer was. I didn’t even know there were oncologists for dogs. At the appointment with the oncologist, they x-rayed his lungs, which were clear still, somehow. But that was pretty much the only good news. There was more—talk about the tumor that was removed, and margins, and lymph nodes. Basically I was told he had 30 to 60 days. DAYS.

But Oslo kept being fine. He was happy and eating and playing with the children and with our other dog, Phineas. For almost another two years, he was his sweet, normal, loving, devoted self. In that time, life around our house improved considerably. The initial trauma of the divorce and all of the life changes that came with it had evened out. Everyday life was different now for me, my daughter and son, and our two dogs. It was calm and predictable once again. Once your life isn’t being shaken up like a snow globe, the simplest things fill you with joy. Completing a task like getting your oil changed or going to your job and coming home, or being able to call the dentist to make an appointment and attend parent-teacher conferences on the same day was cause for celebration. I did two things! In addition to going to work! It sounds silly maybe, but after turmoil, there is such unbelievable delight in normalcy. And Oslo loved normalcy as much as I do. I think that kept him going. And maybe he needed to make sure we were going to be okay.

Meanwhile, the cancer was all still spreading within him, seeping from cell to cell and turning his body against him. An x-ray in this past fall confirmed it had spread to his lungs. His lymph nodes became enlarged. His eye began to swell with the pressure and became infected. He started to slow down. Once his breathing began to sound labored I knew we didn’t have much time, and the morning after a sleepless night for both of us was the morning I knew we didn’t have any time left at all.

My children are eighteen and almost sixteen. We’d talked very openly about all of this during the past two years, about everything that might happen and when it might happen, so they were as prepared as anyone could be, and none of us wanted him to struggle. In a way, then, we were ready. But, it really isn’t like that at all when you walk into the building with your family and realize that not all of you are walking out.

There were lots of hugs and tears in that room that Sunday morning. A nice comfy, clean dog bed took up a considerable amount of floor space, but Oslo refused to get on it. So we all sat on the cold, tiled floor around him. He wouldn’t lie down, but finally at least he sat. The image that keeps returning to my brain is how he slid to the floor after he was administered the heavy sedation, known by anyone who has been through the process of witnessing a pet being euthanized as “the first shot.” The second shot is the one with the lethal medication that stops the heart. After the first shot, as Oslo slid to the floor in a deep, heavy sleep, I had the sense of time slowing. I keep seeing that long, slow slide and I remember trying to hold him and gently easy him down. In that prolonged moment Oslo was still with us, but not. We all had our hands on him, all three of us weeping with as much restraint as we could muster until the vet left the room. You can feel it happen, life leaving a body. You can feel your sweet, loving friend leave this world.

My missing of him is aggressive and sharp, like the taste of very burnt sugar in my mouth. It eases sometimes and I’ve stopped expecting to see him walking into the room. Mostly. Some days I still try to put his food in his bowl before I realize his bowl is no longer there.

Crying to a friend about losing Oslo, I extolled his virtues. I talked about how devoted to me he was, and how he followed me around the house, needing always to be wherever I was, and how he was always there for me. She reminded me of something else: I was always there for him. Even though I mourned the fact that I should have done more with him—more walks, more dog park, more treats, more attention—she said his life was better than it would have been because I adopted him and not someone else. I hadn’t thought of it that way before. I hope it’s true.

Doing Things That Break Your Heart

When I originally envisioned this blog, I thought of it as a series of “Twelve Things That Will Break Your Heart and Why You Should Do Them Anyway.” I didn’t know how to work that in but I knew it was in this context that I would be writing about Oslo. Loving a dog—adopting from a shelter, taking in a dog that someone needs to “rehome,” fostering, volunteering at a shelter—it doesn’t matter how you come at it. But it is one of those relationships that our language does not have the right words for. I didn’t mother Oslo in the way I mother my children, and I didn’t own him the way I own a pair of shoes, and I didn’t care for him in the way that I care for my friends. The way dogs and their people love each other doesn’t fall into any of the people-people or people-object categories. We don’t have useful, loving, warm words for interspecies companionship. For some of the most important relationships in our lives, language truly fails us.

Last week, I talked about being on the road, of recognizing and appreciating where you are and whom you are with. I hope your company includes someone like Oslo.