Sometimes things are not what they seem. And that can be a good thing.

My kids and I hiked this past weekend, seeking the loons we had learned were migrating through the area. The path took us through the woods, and stretches of it ran next to the lake. Spring is slow in arriving this year. All around us were shades of brown and grey, broken only by a few red leaf buds in the dirt, scattered like confetti. The deer and sandhill cranes we spotted blended into this backdrop, though the blush of red on the cranes’ heads allowed us to notice them roosting on their nests. We found the loons too, thanks to their glossy white chests, though they were also difficult to see in the distance, unless they were swimming toward us. Along the path as the woods opened to fields, I noticed a milkweed pod. The cottony insides had long since been carried off by the wind, but the husk that remained bore a striking resemblance to a bird. I had to look twice to be sure. The image stayed with me, reminding me that things that have the shape and appearance of one thing can actually be something else quite different. 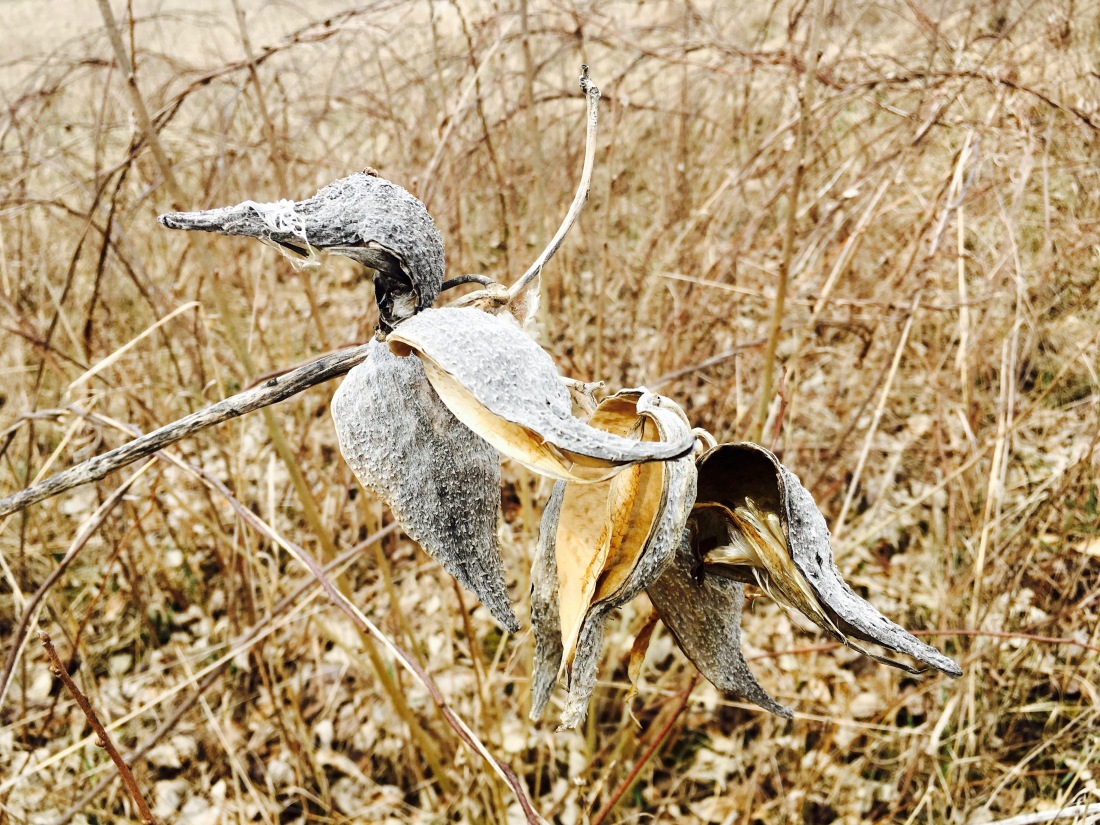 For a long time, throughout the divorce year and in the aftermath, I tended to take a pessimistic view of this idea. As in, be wary and suspicious because things are not what they seem. Proceed with caution: people you care deeply for may look like someone you know but have somehow turned into different someones. I felt as if the world was waiting to trip me up and trick me, and that I perpetually needed to be looking over my shoulder to see what was sneaking up behind me and at the same time casting my gaze far ahead to see what might be coming at me next as I tried to escape what was behind me. I wore this pessimism like a cloak. I put it on and hid myself, but it wasn’t really my true nature.

As time has gone on and the urgency of caution has ebbed, as stability has returned to my life, I find myself becoming me again, the one who can see the flip side to the aphorism that things are not always what they seem. I can recognize once again that something that appears to be a normal, everyday thing, or even something potentially threatening, can actually turn out to be an amazing, wonderful thing. I discovered being alone wasn’t lonely, and later, that a random date with a stranger can turn into something unexpectedly perfect. Life can be delightful that way, when expectations are turned upside down and you discover something new.

Still, it has taken me a long time to move from pessimism back to optimism as a general mindset. Initially, it exhausted me to hear people say don’t worry, everything will be okay. I felt like nothing would be okay again, not ever. That way of looking at the world gradually evolved into to a different mindset. Everything might be okay. But only because I am working my hardest to make it that way. And what if I can’t? Things got better, in part, because I made them that way. But that effort built some much needed confidence and a sense of self-reliance. This was another unexpected gift of the ending of one life and the beginning of another, as the divorce year transitioned into a new year, and a new way of being. I began to trust in my ability to work through things, to handle situations I used to fear. Sometimes it’s still hard to tell the difference though, between fatigue and fear. Sometimes you get tired of handling things, but that doesn’t mean you can’t handle them.

I like to believe though, that one of the things that got me through the toughest of times was the awareness that the pessimism was something I could take off and cast aside when I was ready. I wanted to believe in my own positivity and sometimes wanting to believe is enough. It is a bridge that gets you to the next step.

In the course of my MFA work I was introduced to the writing of Clarice Lipsector, and I stumbled across this line: “It is possible that even then the theme of my existence was irrational hope.” This stuck with me, and I latched on to that idea of irrational hope, hope that even in the darkest of days, things will get better. Sometimes optimism gets a little suffocated by circumstances, but it is still there waiting for you, and I think this sense of hope is what kept me going, and continues to inspire me in good times and bad.

It takes a conscious, mindful effort to see things this way at times. It’s easy to put the cloak back on when life gets stressful. It’s so simple to fall back into the trap of pessimism, so simple it seems like a relief. In a way, it’s familiar and safe, even though it’s a dark place to be. Stress—sometimes little, lowercase stress and sometimes all caps STRESS—can yank me back powerfully into a time where I felt like things kept falling apart, the world was out to get me, and I had no control over anything. The comfort in that, the reason it is so easy for anyone to fall into, is that in that space, there is permission to stop trying to make things better. But when stress sinks into me, I consciously remind myself, this is not that; I’m not back where I was, hiding under the cloak. We have to talk ourselves down from the ledge of panic sometimes. It might be only a panicky moment, or maybe we feel ourselves falling back into a habit of anxiety and worry. But then you go for a walk and see a milkweed pod shaped like a bird and it lifts you, it allows you to reprogram your thoughts and emotional responses. It allows you to remember who you really are.

Enjoy the path that you find yourself on today. Love, Cath

4 thoughts on “On Appearances and Optimism”